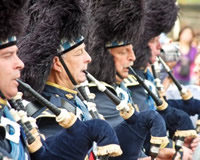 Edinburgh hosts a staggering 12 world class Festivals each year ranging from Jazz and Blues to Books and Films which makes Edinburgh the Festival city of the UK and the perfect place for a short break.

It’s quite a line up and although some of the best known ones are in August you will the others spread across the year.

All of this adds up to a staggering 2,500 events each year and so, it is fair to say, if there is one place you are planning to head this year for a weekend break or short break make it Edinburgh as you are sure to be well entertained.

The key dates for the Edinburgh Festivals in 2012 are: